Or the Thing I've Been Working on Since November 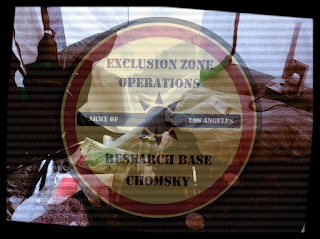 Due to onsite security concerns, no weapons, writing implements or communications devices are to be brought into Research Base Chomsky. You may leave these in the custody of LACOM prior to your Operation Chess Wizard brief or leave them in a secure location of your choosing.

All information concerning Operation Chess Wizard is Top Secret. Do not share anything you learn during the mission with anyone.

For those of you who might have wondered if I fell off a cliff, I'm now able to tell you why most of my other projects have been on hold for the last three months: I've been hard at work on an escape scenario for Juggers of the Wasteland Winter Games IV a post-apocalyptic themed event near Victorville, CA February 24th-25th.

EZO: Research Base Chomsky is a live action survival horror scenario. In some ways it's similar to an escape room, and in some ways it's like a murder mystery party or convention LARP. I don't think that I've seen anything quite like it before, though and I'm excited to have created something new to share with you.


It is the second part of a series of Exclusion Zone Operations that Operation Avalon is running at our events. These are scenarios inspired by the video game S.T.A.L.K.E.R: Shadow of Chernobyl  and the novel that inspired the game: Roadside Picnic by Boris and Arkady Strugatsky (which incidentally is one of my favorite SF novels).

In the ruins of post-apocalyptic California, there are anomalies, apparently alien artifacts, and inexplicable phenomena. Players take the role of Stalker teams sent into the exclusion zones to scout, escort researchers, eliminate unauthorized intruders, and recover artifacts and anomalies.

EZO: Research Base Chomsky is our first non-combat Exclusion Zone Operation. In it, the players are a Stalker team sent to find out what happened to a research outpost on the edge of Zone Tango, a station that mysteriously went dark a few days ago.

Once deployed to the base, the players will have one hour to restore communications and request evacuation. In the event they fail to do so, the base will be considered irrevocably compromised and an airstrike has been dispatched to destroy the base, and the team. 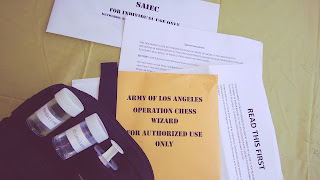 There are some escape room-like puzzles, but the primary challenge will come from dealing with the ongoing consequences of what caused the base to go dark. There's a couple of simple, but elegant, game mechanics that will allow players to do so, but primarily they will need teamwork, suspicion and deduction to survive.

The game design, as well as the scenario itself are all my original work. I think it's a really solid game, and the playtest was very successful.

I was inspired primarily by combining a classic film from the 80s with the premise of a cult classic from the oughts. It also has elements that might be familiar to anybody who has read my work for the SCP Foundation. To say much more would risk spoilers.

There are four possible endings for the scenario, and three of them are broadly "victories". The team with the best time for each of these three conditions will receive a piece of original artwork (during the awards ceremony on Sunday the 25th at 3 pm).

How do I play?

Tickets are available here and will also be available at the front gate (for $20, in addition to general admission).

Each game will support a six to twelve person team, and teams will be created from the pool of all players who sign up for a given slot. Additional games may be added if these sell out. Sign up sheets for each mission will be available at the front gate. Presale tickets will have priority.

The times posted above are your assembly times for the mission briefing, which will start as soon as the team is assembled, or after 10 minutes if there are any missing players. If you miss the briefing you won't be allowed to play in that game. There's no guarantee you will be able to get a slot in a later game, so try to be there for your briefing.

In the event that all games sell out, and there's sufficient demand, we will be adding additional games.

Players need to be 13 or older, and should leave all prop weapons, cell phones, and writing implements in a secure place. Each game will take up to an hour and 45 minutes. Like an escape room or mystery story, the fun of the scenario is highly dependent on surprise, so each person may play only once. Once you have played, please don't spoil it for anybody else.